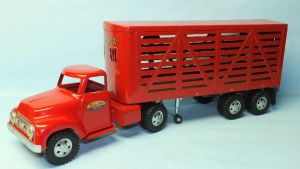 Mr. Gilliland was baptized and has been a member of Boyd Christian Church since October of 2019.  He was a member and director of the Marion County Farm Bureau for many years.  He was a member of the Illinois and National Auctioneer’s Association and a 40 plus year member of the Midwest Trucker’s Association.  Mr. Gilliland loved to auction, have a sale and go to sales. He would barter with anyone.  He was a collector of many things including toy trucks, tractors and signs.  He was always busy, never sat still and always had things to do.  He cherished the time he spent with his family and friends.

Mr. Gilliland graduated with the Missouri Auction School’s “Class of 1964” and Centralia Township High School’s “Class of 1953.”  He has lived most of his life in Walnut Hill, Illinois. Mr. Gilliland worked the fields as a farmer.  He was also an auctioneer from March of 1964 until 2019, and operated the Gilliland Auction Company with his brother, Tommy.  He was self-employed as a truck driver and hauled livestock, feed, fruit and vegetables during the summer months.  In the last 20 years, he hauled grain and rock.

A Celebration of Life Service for Mr. James Harold “Jim” Gilliland will be held at 11:00 A.M. on Tuesday, February 18, 2020, at the Moran Queen-Boggs Funeral Home in Centralia, Illinois with Pastor Jeff Van Meter officiating.  Interment will follow in Hillcrest Memorial Park near Centralia, Illinois.  Family and friends are invited to visit with Mr. Gilliland’s family from 5:00 P.M. to 8:00 P.M. on Monday, February 17, 2020 at the Moran Queen-Boggs Funeral Home and from 10:00 A.M. until  the time of services at 11:00 A.M. on Tuesday, February 18, 2020 at the funeral home.  Memorial contributions may be made in Mr. Gilliland’s honor to the American Cancer Society, Marion County Farm Bureau Foundation for Scholarship or the Boyd Christian Church in Dix, Illinois and will be received by the Moran Queen-Boggs Funeral Home at 134 South Elm Street in Centralia, Illinois.  Please view the online obituary, send condolences or share memories with Mr. Gilliland’s family at www.moranfuneralhome.net.

To send flowers to the family or plant a tree in memory of James Harold Gilliland, please visit our floral store.