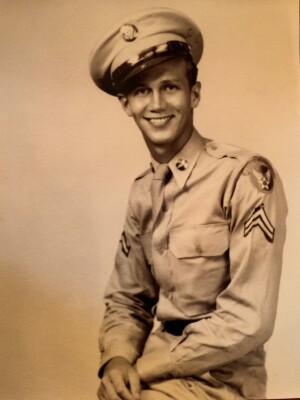 LeRoy Vernon Ward, age 91, of Centralia, Illinois, passed away on Thursday. June 24, 2021, at home with his loving family by his side.  He was born on June 28, 1929, in Centralia, Illinois, the son of Roy and Lucy (Byars) Ward.   LeRoy and Bonnie Maroon worked together at the Centralia Evening Sentinel, where he met the love of his life.  They started dating in February of 1951, engaged in April of 1951, and they were married on August 4, 1951, at the First Pentecostal Church in Centralia, Illinois.  It was a short courtship, but a long marriage.  LeRoy was looking forward to being married for 70 years this year.

LeRoy was preceded in death by his parents, Roy and Lucy Ward; and father-in-law and mother-in-law, John Maroon and Selma Maroon.

LeRoy joined the U.S. Air Force at the age of 16, with the permission of his father.  He was a veteran of the U.S. Air Force serving his country during World War II and the Korean Conflict.  He was chosen to attend the Florida and the Illinois Honor Flights to Washington, D.C..  He was so proud to have served his country and to tell stories of his time in both wars.  After serving in the military, he started working at McDonald Douglas in Saint Louis, Missouri.  He went on to work for the United States Post Office, stationed in the postal car of the train from Chicago, Illinois to Memphis, Tennessee.  When the postal train service disbanded, he worked at the Centralia Post Office and later became the Postmaster of the U.S. Post Office in Ashley, Illinois.  He retired from the post office in 1986, and then worked at the Irvin Funeral Home and later at the Moran Queen-Boggs Funeral Home for a combined 28 years.

LeRoy loved spending time with his family, especially the grandchildren and great-grandchildren, and friends.  He was best known to them as “Gampy.”  He was a snowbird and loved spending his winters in Melbourne Beach, Florida.  He was a member of the First Apostolic Church in Centralia, Illinois, where he served as head usher and Sunday school teacher for many years. LeRoy was also a member of the Centralia American Legion Post 446.    He was active in the Outdoor Resort’s Men’s Bocci Ball Club, Wednesday morning Men’s Golf League, Men’s Breakfast Club, where he fried and served the sausage.  LeRoy and his wife founded the Annual Memorial Service that honored all former Outdoor Resort’s members at their home resort in Florida

A Celebration of Life Service for Mr. LeRoy Ward will be held on his 92nd birthday, at 12:30 P.M. on Monday, June 28, 2021, at the First Apostolic Church with Pastor Jonathan Urshan officiating.  Interment will follow in Hillcrest Memorial Park near Centralia, Illinois.  Military Honors accorded by the Centralia American Legion Post 446 and Veterans of Foreign Wars Post 2055.  Friends may visit with LeRoy’s family from 10:00 A.M. until the time of his services at 12:30 P.M. at the church.  Memorial contributions may be made in Leroy’s honor to the First Apostolic Church Renovation Fund in Centralia, Illinois or the Murray Center Parent's Association and may be received by the Moran Queen-Boggs Funeral Home at 134 South Elm Street in Centralia, Illinois.  Please view the online obituary, send condolences, or share memories with Mr. Ward’s family at www.moranfuneralhome.net.

To send flowers to the family or plant a tree in memory of LeRoy Vernon Ward, please visit our floral store.